There was an error retrieving images from Instagram. An attempt will be remade in a few minutes.

Before leaving Albania, we decided to cycle the coast of the country. It was absolutely stunning and the weather was playing along with the burning sun and +25 degrees temperature. While traveling through Albania, we often were thinking why the country has such an unfortunate reputation in the world. Fortunately, all my prejudice and expectations were completely ruined. I have super positive impressions from cycling coastal Albania than for example the more popular Croatian coast. It is so calm and relaxing here! No rush! No honking, not so many cars. Very clean environment, clean transparent water. People are friendly and excited. Undoubtedly, I will be coming here in the future.
We cycled towards coastal city Sarandë that is famous for its unforgettable picturesque beaches via the Blue Eye (Syri i kaltër). It is a water spring, natural phenomenon. The clear blue water of the river bubbles from a more than fifty metre deep pool. As Wikipedia says divers have descended to fifty metres, but it is still unclear what the actual depth of the karst hole is. The source discharges of 18.4 m3/s. An amazing scene!
Once we reached Sarandë, we decided to reward ourselves with local sweets, wine, fruits and food as unfortunately these were our last days in Albania. The local confectionery shop did not disappoint us: a cake, halva, candies, cookies – it felt like birthday. Than a quick stop at a shop to get the beach supplies – a local wine, olives and melon and we were ready to jump in the sea. At the beach were a couple of locals sunbathing. I spotted a grandma in bikini and got the green light to appear in the same attire on the Albanian riviera as I wasn’t sure if it is fine in this mostly Muslim country.
After the picnic we continued to Ksamil, where we decided to stay at a campground. The campground turned out to be absolutely marvellous! The owners were very kind and hospitable people: we were greated with iced coffee and a beautiful spot to stay just a few meters away from the coast.
Later that night after having a swim, we went for a local restaurant to spend our last Albanian Lekes on long awaited big portions of tasty mussels (for me) and grilled lamb (for Sascha).
And the morning after we hit the road towards the Greek border – getting ourselves mentally ready to be back in the EU/Euro zone with higher prices and LIDL supermarkets. Let’s see what Elláda is going to feel like. Another country that I have never been! 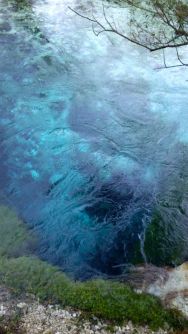 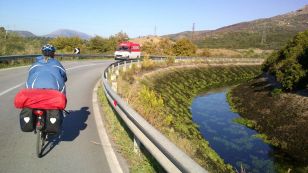 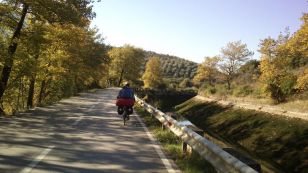 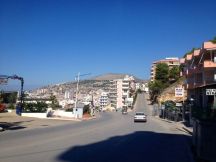 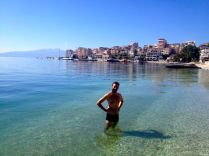 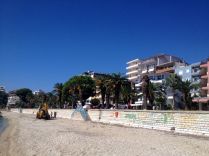 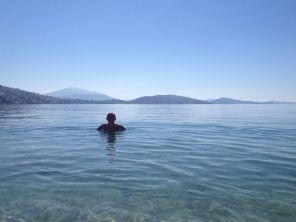 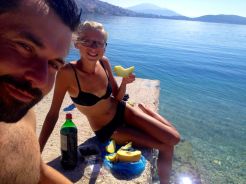 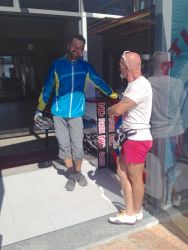 No pain, no gain! 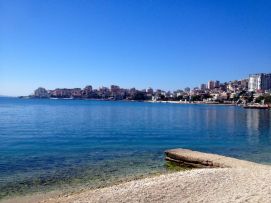 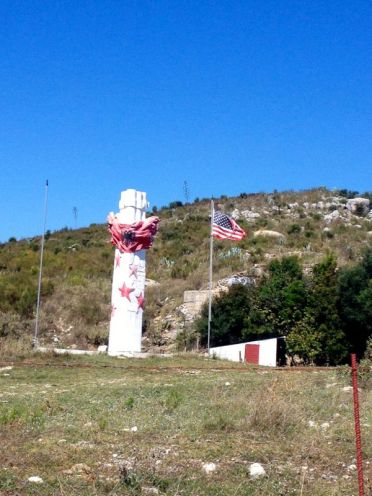 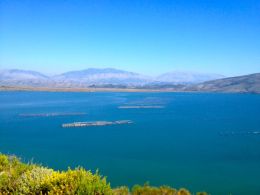 our german neighbours at the campgorund

and another germans – happy we are not cycling there

…and the sea again 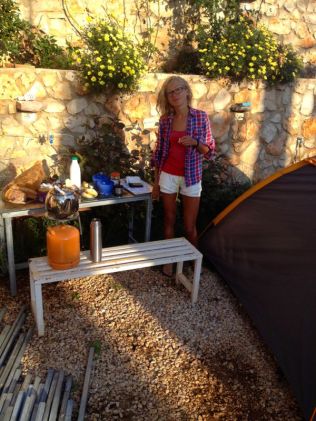 we did not have enough money to pay for the “ferry”, but they took us along anyway